GOAL Survive 16 waves of enemies and protect the Crystal.

You start in Knight form. WASD to move and Space to Attack.

After taking some damage in Knight form, you will morph to Totem form.

In Totem form, WASD to select postion and Space to Drop Totem.

Dropped totems will fire on enemies automatically and expire after a while. After you drop a Totem, you will morph to Spirit form.

In Spirit form, WASD to move and Space to Scare Enemies. Scared enemies will scatter in a circle around you.

After a brief period, you will morph to Knight form again.

Our hero, Morph Knight is an ancient protector of the lands of Huhumanga. Morph is intrinsically connected to the Abalka Crystal, a source of enormous power from time immemorial...a giver of life.

The Abalka Crystal is fused with Morph Knight's life force, and as long the Crystal lives, Morph lives.

The Skeeks, a randy rabble, have come to believe that destroying the Abalka Crystal will unlock the key to immortality. They seek to shatter the crystal to a million pieces, and to take its power.

Only Morph Knight stands in the way of the Skeeks. Armed with polymorphic powers granted by the Crystal, Morph courageously protects the Crystal's essence.

Let us know what you think the comments  👇🏽

I love your team games soo much, keep working. I know art design in photoshop and c# coding, if you need help you can call me. :)

Great game, it was kinda hard and the scare ability worked a bit weirdly but otherwise it was pretty cool

Great! I love this old-school-game style achieved with the art and the music. The idea is unique and you used it really well. I personally prefer using totem and knight than spirit. And I enjoyed the fact that you put some lore.

Thank you for the very kind words :) 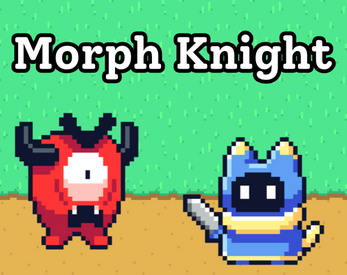